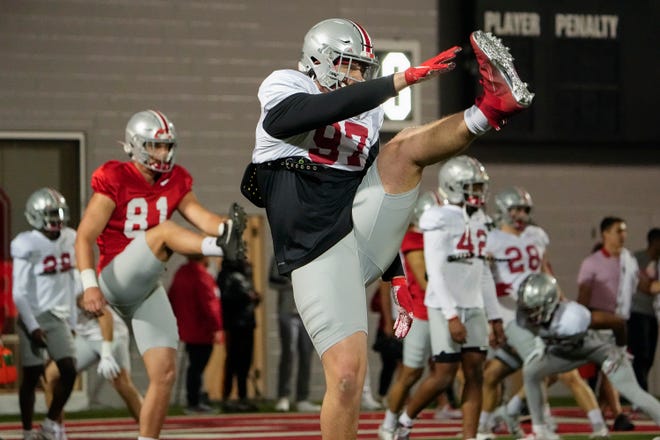 Noah Potter will wear a visor inside his helmet this season.

“I hate it,” the Ohio State defensive lineman said Thursday.

But Potter is grateful to have to wear it. The native mentor knows it’s a minor concession after a scary ordeal last year that could have ended his career.

“I’m just excited to get back to playing what I love,” Potter said.

In September, the Ohio State defensive lineman thought he was about to return from foot surgery when he noticed peripheral vision issues in his right eye. Potter believes it was a football injury but cannot identify a specific incident.

He went for a checkup, and from the way he saw the OSU doctors conferring, he could tell it was something serious.

William H. Havener Eye Institute surgeons performed the operation and saved his vision. But the recovery process was difficult.

“It was probably the worst experience of my life,” Potter said. “It was terrible. I could feel the stitches in my eyes, but I got it fixed. They put a gas bubble in to keep it in shape.

“With eye surgery, the shape of the eye gets a bit distorted. My eye shape was in a perfect sphere for a little while, then fluid can get inside the eye just by opening it .

To avoid this, Potter had to rest on his side for four days. He could only leave this position for five minutes per hour.

It was not the only obstacle. Two weeks into the recovery, doctors carried out tests to make sure the scar tissue from the surgery had receded enough to avoid a second surgery. Fortunately, it was.

“I’m just grateful to the doctors that I was able to fix it,” Potter said.

With his foot and eye fixed, he now hopes to make an impact on the pitch this year.

“There is always rust. There’s not much you can do in the training room, so trying to get back into football form is probably the biggest transition.

“I’m confident wherever I am,” he said. “I think I bring a different flavor to the D line if I’m inside, but in the COVID year (2020) I was really starting to play well outside. I think wherever Coach J (defensive line coach Larry Johnson) sees fit, I think I’m good to go.

Potter acknowledges that foot and eye injuries caused him to temporarily lose his passion for football. But it came back.

“I gain confidence every day,” he said. “I kind of lost that record after two really serious things happened. I’m like, man, I’m just trying to be healthy. But now that I’m healthy, I’m really starting to rediscovering that motivation to want to be the best player possible, so I’m really excited about that.

Bill Rabinowitz covers Ohio State football for The Columbus Dispatch. Contact him at brabinowitz@dispatch.com or on Twitter @brdispatch.

Get more Ohio State football news by listening to our podcasts