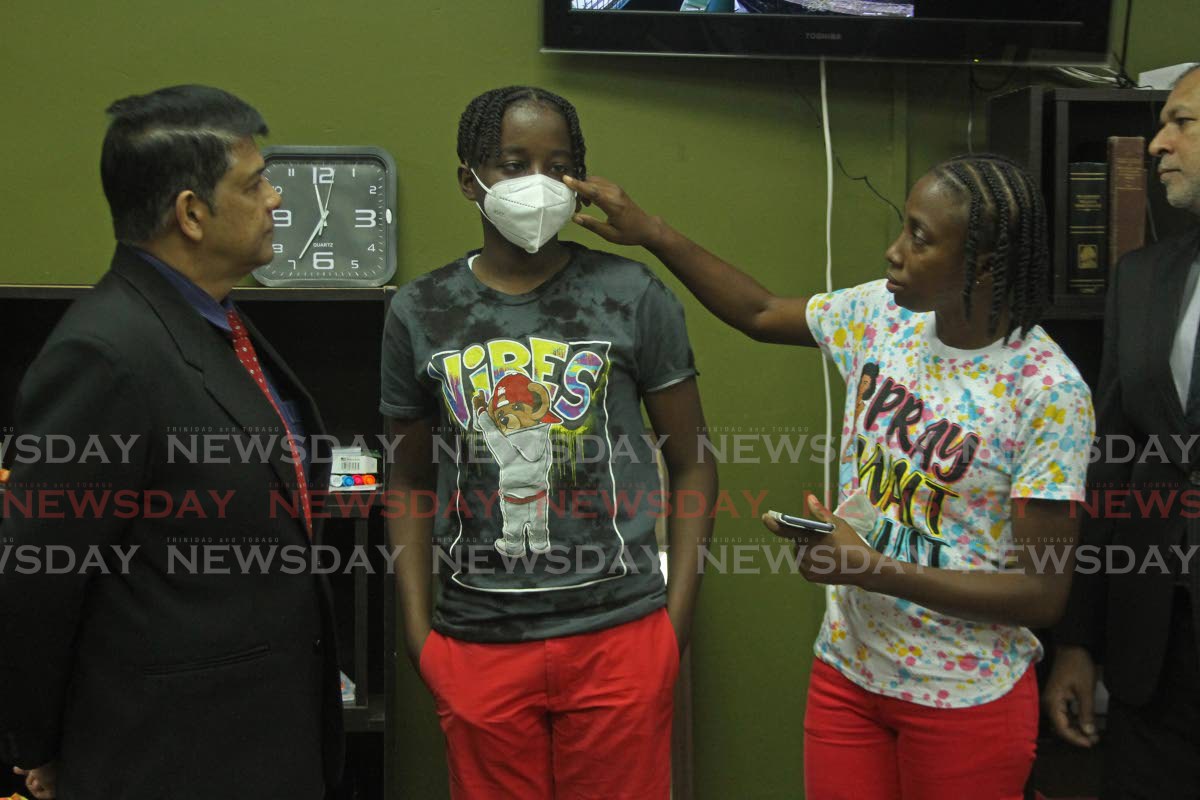 Names get mixed up, so 13-year-old Couva Boy has eye surgery for another patient

A mix-up between the names of two outpatients at San Fernando General Hospital resulted in eye surgery on one 13-year-old being intended for the other.

The boy, Stephan Thomas, now 14, has since undergone corrective surgeries in hospital, but his mother Latoiya Moses, 33, said his eye condition has not improved.

She has taken legal action against the South West Regional Health Authority (SWRHA), accusing the staff of negligence.

His lawyers, Prakash Ramadhar, Ted Roopnarine and others sent a pre-action protocol letter to SWRHA’s legal department on December 17.

Speaking at a press conference Wednesday at Ramadhar’s office in San Fernando, Moses, a single mother from Couva, said her only child had a “strabismic” eye (his left eye).

On January 11, she accompanied him to the hospital’s eye clinic and when his name was called, a staff member said he needed laser surgery. She completed and signed several documents consenting to the procedure.

She later found out that the laser treatment was for someone named Stephon Thomas, who has cataracts, not Stephan Thomas.

The same day, doctors gave him prescriptions and discharged him.

“They told me his natural lens was damaged and gave me prescriptions,” she said.

A few days later he complained of not seeing in the damaged eye and she was returned to the hospital.

On January 19, Stephan underwent surgery. Moses said his eye condition worsened, he was in pain and the eye was swollen.

In May last year, he was hospitalized for 14 days. Four months later, in September, Stephan underwent surgery again, this time because the lens previously placed in his eye was the wrong size.

With tears streaming down her face, Moses said she felt like she had failed to protect her child.

She added: “I’m not condemning anyone, but something like this made me realize that even if we think someone is qualified and knows what they’re doing, we can still ask a question. We all have the rights to do so.

“For me, I hadn’t been able to do that, and now my son is in a position where I’m not sure I’d get the support I needed just by coming here (to the conference) today’ today. I just want my son to get back to a normal life.”

Stephan, a freshman at Couva West High School, still attends the clinic for his home condition.

“We always argue when it comes to going to the hospital for every appointment. It’s something that affects us mentally and psychologically. It’s unbearable,” Moses said.

Due to light sensitivity and other factors in his damaged eye, Stephan says he can’t play with his only friend, a dog named Blackie.

The soft-spoken boy said people usually laugh at him because of his squint. For this reason, he has no friends and remains alone. But after the operation, being around the dog and other animals now hurts her eyes, and her mother took the dog out of the house.

“Before the operation, I used to go outside and play with my dog. He was my only friend. Now most of the time I cry for him. Sometimes I took him for walks in the savannah.

“Before the operation, my eye was perfectly fine,” said Stephan.

The letter sent to SWRHA accuses staff of failing to properly check and confirm that the treatment given was the right one for the right patient.

Lawyers seek special damages for medical and travel expenses for mother and son. They also want general damages for bodily injury and consequential loss for a sum to be agreed upon.

Ramadhar and Roopnarine also want the authority to claim responsibility for the incident, saying Stephan suffered and continues to suffer severe emotional and psychological distress and extreme pain after receiving the mistreatment.

Newsday called SWRHA officials for comment on the matter.

An official replied, “SWRHA takes note of media reports and inquiries regarding the above.

“Based on our initial checks, there is no record of receipt of the attorney’s letter. The authority will contact the attorney for a copy.”