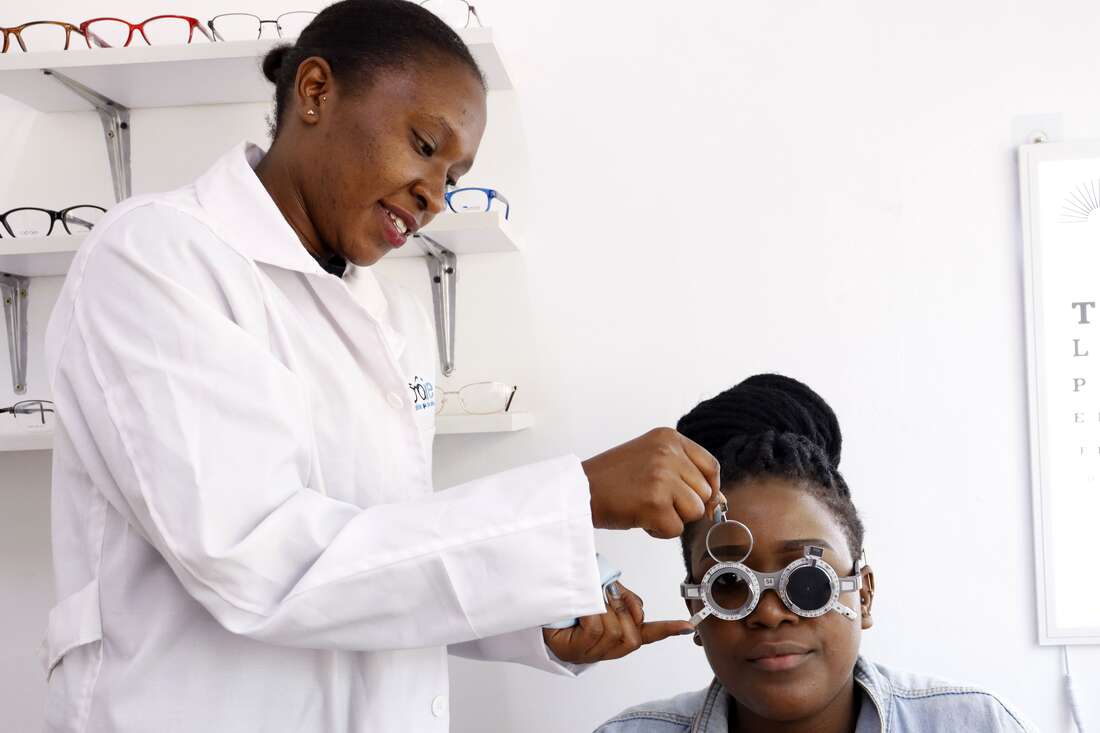 When Cybill Ambogo, 25, was diagnosed with nearsightedness (myopia), she was unaware of the struggle that awaited her to seek treatment.

She started having vision problems in 2012, when she was a student.

“In school, I used to sit at the back of the class most of the time. I was perfectly normal, but one day I couldn’t see the picture very well. I thought the problem could be solved by going to the front of the class,” she says.

“I had trouble reading the white exam papers,” she says.

Ms. Ambogo’s main challenge was access to an ophthalmologist to diagnose her condition and the affordability of services.

“I was a student at Kakamega and there were no specialists near me. I had to travel to the nearby town of Kisumu to get medical attention and even get a suitable pair of glasses,” she says.

But even after consulting an ophthalmologist, it was still difficult to afford suitable glasses which cost 8,700 shillings.

The lack of specialists and the high cost of treating eye problems have led to serious vision problems for millions of people around the world.

According to the World Health Organization (WHO), 28 million people worldwide have severe visual impairment, including 750,000 Kenyans.

WHO data also indicates that of the 39 million people living with blindness globally, 224,000 are Kenyans, with 80% of blindness cases in the country due to causes that can be cured and prevented.

Data collected from Lapaire Group, a parent company of Lapaire Kenya, a Nairobi-based eyewear company, indicates that the eye problems detected in many people are preventable.

According to the company which has tested over 60,000 people across the continent, although there is very limited data due to the lack of local studies, 60% of people with visual impairment are due to refractive errors, which is therefore avoidable.

Types of refractive errors are nearsightedness (myopia), farsightedness (farsightedness), presbyopia (loss of near vision with age), and astigmatism, a problem caused by an error in the shape of the cornea.

Diana Lang’at, an optometrist in Nairobi, says different factors have contributed to the high number of Kenyans with impaired vision, including poverty, lack of public awareness of vision problems, difficult and expensive access to ophthalmologists and optometrists, the high cost of eyeglass frames and lenses, and the non-coverage of optical care by many employers.

In Africa, it is estimated that 550 million people need glasses but barely 1% have access to them.

Furthermore, the Ministry of Health estimates that 15.5% of Kenyans need quality eye care services, ranging from surgeries, treatments and eyeglass corrections, yet only around a fifth have access to health services. ocular.

According to Ms Lang’at, affordability has led many people to share or buy glasses on the street.

“One thing people need to understand is that even if you are diagnosed with the same problem as the next person, the extent of the problem usually differs, so the lenses prescribed are usually very specific,” Ms Lang’at says. .

Therein also lies the immense danger of getting any kind of glasses on the street.

“If you have bad glasses, there is a possibility of developing retinal detachment with permanent damage, a condition that could be irreversible. This could create an even more complicated situation where even with the best glasses you still won’t be able to see well,” she adds.

With this, experts recommend that the best and cheapest way to prevent such complications is prevention.

“It all depends on lifestyle, especially what you eat. It’s important to have a healthy diet, drink plenty of water to keep your eyes in good shape,” she says.

“For people who spend most of their time on computers or phones, I advise them to use the 20-20-20 rule, where after every 20 minutes of working on your gadget, you stop for 20 seconds to focus on things that are 20 meters away,” she says.

According to Ms Lang’at, almost everyone will have a refractive error in their lifetime, the affordability of eyeglasses needs to be addressed.

“We also need to educate our community about refractive errors and other sight problems and how they impact people’s daily lives,” she said.