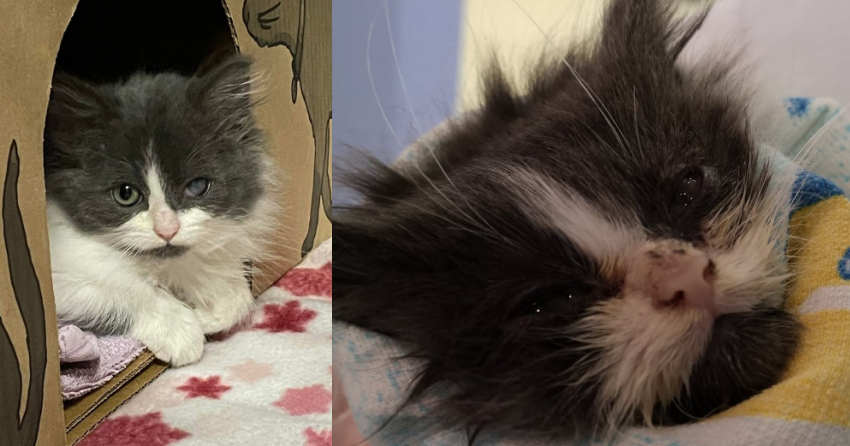 Merritt was just one of four kittens found living under a townhouse in Prince George when a good Samaritan stepped in to bring the litter to the BC SPCA.

When the kittens arrived at the shelter, they were all underweight, dehydrated, lethargic and not eating. Merritt also had a very cloudy eye.

The fur babies were carefully watched and while two of the four were adopted from Prince George, Merritt and her sister Hope were transferred to the Kelowna BC SPCA for further care.

Merritt has a corneal ulcer in his left eye and vets felt the scar tissue would only get worse.

“When Merritt arrived at the shelter, we were hoping there was enough blood in her eye to make her viable,” says Sean Hogan, Director, BC SPCA Kelowna.

“Unfortunately the scar tissue that developed on her eye was restricting blood flow and the tissue was starting to die off so she had to have surgery to remove the eye.”

The BC SPCA hopes to collect funds this will help cover surgery, medication, treatment and regular checkups for the kitten.

Although the furry baby will require months of continuous care to recover, she will always have her sister by her side while she waits.

“Merritt is a sweet, playful and cuddly kitten,” says Hogan.

“She is related to her sister Hope and we will be looking for a home for both of them once Merritt recovers from her surgery.”

Donations to Merritt or other animals in need at the BC SPCA can be made here.

Support local journalism by clicking here to make a one-time contribution or by subscribing for a small monthly subscription. We appreciate your consideration and any input you can provide.