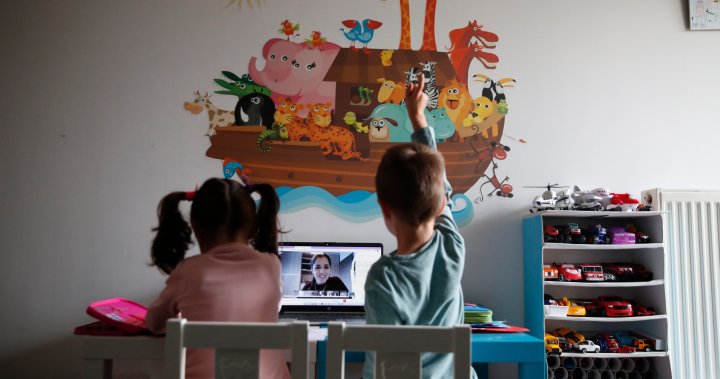 With long periods of online learning, video calls instead of in-person gatherings, and less time spent outdoors, ophthalmologists across Canada are noticing an overall increase in eye problems, especially in children.

While parents and guardians may not be able to reduce screen time during the pandemic, optometrists say there are ways to give your eyes a break.

“I’ve seen an increase in eye strain in general at all ages due to increased screen time, but we’re seeing it a lot more in the pediatric population and we’re seeing a lot more dry eyes as well. Optometrist Mohammad Lawendy of London, Ont., Told Global News.

“What I’ve seen increase significantly are people who come in with dry eye disease who don’t have any of these predisposing factors – a healthy three-year-old, a healthy five-year-old. The only thing I can explain, and many studies have done, is basically the increase in screen time. ”

Ontario could make distance learning a permanent part of school

Michael Nelson, president of the Canadian Association of Optometrists, which has approximately 5,000 members across the country, divides the problems he saw in his clinic in Winnipeg, Manitoba, into two categories.

The first category is for symptoms related to increased screen time that will likely go away once screen time is reduced. The second focuses on the potential for long-term impacts.

“The question is: is the increased use of a screen making us more myopic or more myopic? “

Nelson pointed to a study from China that found a sharp increase in the prevalence of myopia in children in 2020, when children were confined to home due to the pandemic, compared to the previous five years.

The the study used data from schools photo projections of 123,535 children aged 6 to 13 at 10 primary schools in Feicheng, China, and found that the prevalence of myopia increased 1.4 to 3 times in 2020 among children 6 to 8 years, compared to the previous five years. A minimal difference was found in children aged nine to 13, according to the study.

One of the first hurdles in treating eye problems in children is identifying that there is a problem in the first place.

This can be a challenge, say optometrists, because children often don’t complain of symptoms.

“Children have this incredible ability to adapt to any condition and situation and quite often a lot of children may not be complaining,” says Nelson.

“They might think, ‘OK, everyone sees it that way’ or ‘It’s hard for everyone. “

Lawendy suggests that parents and guardians watch out for specific symptoms and behaviors.

“When your children are on a screen, you just have to look to see: are their eyes a little red? Are their eyes crying? Because dry eyes will make your eyes cry, ”he explains.

“Patients who have dry eyes have watery eyes because there is a response to the brain that says it is dry and evaporates quickly. There is not enough oil on the eye. So it really rocks. “

Nelson adds that headaches and a shorter attention span when looking at screens are also symptoms to watch out for, as well as if a child rubs their eyes a lot.

“But probably the best way to do it is to just go see an optometrist, take him for his routine eye exam,” Nelson says.

It’s not just the kids

Even before the pandemic, symptoms related to screen use among adults were already commonplace.

Since the pandemic, however, Nelson says that “everyone is using more screens than we were before.”

4:36
60% of Canadians say their screen time has increased during pandemic: Ipsos poll

60% of Canadians say their screen time has increased during the pandemic: Ipsos poll – March 11, 2021

Computer vision syndrome, for example, was more common among segments of the population whose jobs involved a lot of screen use, but Nelson says he sees more people with symptoms like blurred vision and blurred vision. burning, dry, itchy, red, or watery eyes. .

Insufficient convergence is another growing problem, which involves problems with controlling the eye muscles, especially when looking at something closely.

Inappropriate or outdated prescriptions can also cause problems, Nelson says.

For adults in particular, progressive or multifocal lenses are not the best choice for viewing a screen all day.

“You need the right tool for the right job,” he says, “there is a subcategory called office goal or task goal and it’s designed so that you can focus on a computer and very printed documents. well and have a normal posture and ergonomic position and not have to tilt the chin up.

For prescription issues, the solution is pretty obvious, but Lawendy says there are a number of other small steps to maintain eye health, including simple adjustments you can make at home.

“Instead of using an iPad very close, if you have access to a laptop, try using a laptop, keep it handy, make sure there is less glare,” he said, adding that you can tilt the screen to reduce glare.

If your child has watery or red eyes or blinks excessively, he suggests seeing an eye doctor to help him choose eye drops or artificial tears to help lubricate the eye.

“In some cases, we could actually donate reading glasses. So these are not glasses that they will wear all the time. But maybe just for the computer or just when they’re doing a lot of work, ”Lawendy adds.

Nelson says it’s important to take breaks away from the screen. He suggests the 20-20-20 rule.

“Every 20 minutes, take 20 seconds and look 20 feet away at something or get up and walk. So you don’t constantly focus at that distance for long periods of time.

Most of these eye problems are just symptoms of excessive screen use and will likely stop when screen use is limited again, Nelson says, but not all.

Is studying too much nearsighted? What Researchers Are Learning About Myopia (2018)

Nelson says managing myopia is a “huge and growing area in our field” and that the World Health Organization has identified it as a global problem.

“The (incidence) of myopia around the world is increasing, that’s for sure. Globally, we have identified it and that is why there is a lot of research in this area.

One suggestion for slowing the progression of myopia is to spend more time outdoors.

“We know that children who spend more time outdoors in the sun tend to become less myopic,” he says.

There are also different types of glasses, certain types of contact lenses, and even eye drops designed to try and slow the progression of myopia, Nelson adds.

While the circumstances are certainly unique at this time, when conditions allow for a reduction in screen time, the Canadian Association of Optometrists recommends not spending screen time at all for infants under the age of two, no more than one hour per day for children two to five and “ideally no more than two hours of recreational screen time” for children five to 18 years old.

Communication, key to collaboration for the treatment of dry eye