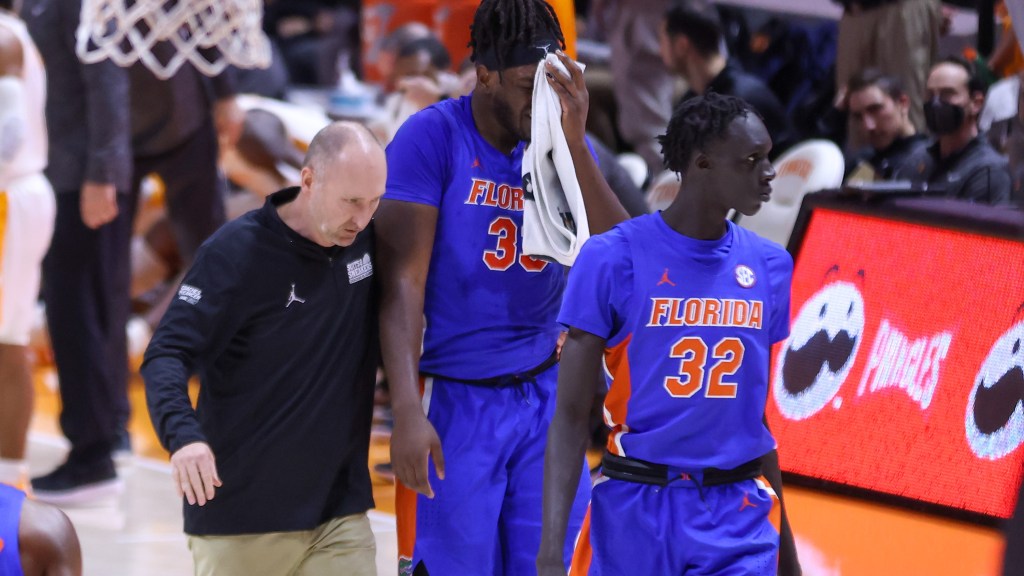 C Jason Jitoboh out for the season after eye surgery

Florida basketball fans received bad news on Friday when head coach Mike White announced that center Jason Jitoboh will miss the rest of the season after undergoing eye surgery to repair an injury sustained just before the end of the first half in the defeat at the Tennessee Volunteers Wednesday night.

The loss of Jitoboh further decimates an already shorthanded frontcourt, which misses leading scorer Colin Castleton indefinitely with a shoulder injury as well as the transfer of CJ Felder, who recently missed time in due to non-COVID illness. That leaves the spots in the middle of the paint to JUCO transfer center Tuongthach Gatkek and sports striker Anthony Duruji, who are 6ft 9in and 6ft 7in respectively.

The 6-foot-11 big man from Nigeria has put up 4.1 points per game with 2.4 rebounds and 0.6 blocks while averaging 10.7 minutes in his 18 appearances this season. However, Jitoboh saw his playing time increase – including starts in his last four games – in Castleton’s absence and made the most of it, providing quality minutes on the court for Florida. His eight points and 10 boards against the Vanderbilt Commodores, and 12 points and five boards against the Ole Miss Rebels represent statistical highlights from his recent efforts.

The Gator Nation can expect plenty of small balls as their beloved team continues to fight for a spot in the big dance in March.

3 takeaways as thwarted bid against Tennessee No. 18 fails

PHOTOS: Highlights from Florida Basketball’s tough loss to the Volunteers

Let us know your thoughts, comment on this story below. Join the conversation today.

Jason Jitoboh out for the season after eye surgery