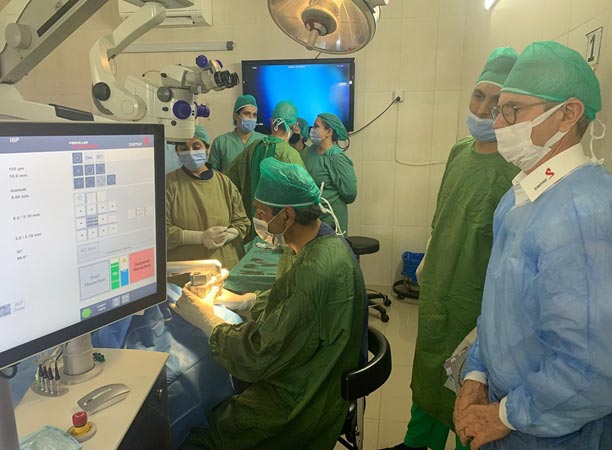 Al-Shifa Trust Eye Hospital has introduced a revolutionary new Swiss technology for eye treatment which will benefit many people in Pakistan. “Al-Shifa has become the first facility in Asia to use the femtosecond laser developed by a Swiss company to perform Bowmann layer grafting for the treatment of keratoconus, an eye disease that affects the cornea,” said Professor Wajid Ali Khan. , chief medical officer. Trust services. He said the latest technology will not only enable our ophthalmologists to provide better eye care to their patients, but we will also train doctors working in other institutions.

Wajid Ali Khan informed that about two hundred thousand people need the procedure but the trust can perform 800 surgeries a year due to limited supply, he said. He said that due to this latest technology, layers of a cornea can be used to treat two to three patients.

Senior Engineer of Ziemer Ophthalmic Systems AG Fritz Meyer who was visiting Pakistan informed that this treatment takes a very thin layer of the donor cornea and is placed in a pocket of the diseased cornea of ​​the suffering patient. This procedure strengthens the weak cornea, thus avoiding the need for a complete corneal transplant. So far, twenty patients have been successfully treated with this technique at Al Shifa Eye Hospital, which is encouraging, he added.

It can be mentioned that the trust was established in 1991, fighting against blindness and introducing many advanced treatment options over the past three decades.

In 1992, Department of Cornea and Refractive Surgery was established at Al-Shifa Eye Hospital, Rawalpindi. Later, radial keratotomy was introduced in 1993 to treat patients who wear glasses. Excimer laser was introduced in 1995. Amniotic membrane transplant and limbal stem cell transplant started in 2006 and amniotic membrane bank was also established. To treat patients with keratoconus in which the cornea becomes thin and conical, a new treatment called collagen cross-linking was launched in 2008. This treatment was not even offered in countries like the United States and Canada. Over 5000 patients have benefited from this treatment since then and most of them are children and young adults.

In 2008, trust established the first international Eye Bank standard with technical support from Eversight Eye Bank Michigan USA. Al-Shifa has the largest corneal transplant center in Pakistan. Al-Shifa shares his experiences with domestic and foreign doctors by presenting his work at domestic and international conferences and publishing it in medical journals.

“It Completely Changed How I Feel About Myself:” One Patient’s Eye Surgery Story